I don’t intend for this blog to become a political soapbox, but it is an outlet for my more rambling of thoughts, so bear with me once more as I throw yet another opinion into the world of social media.

Let’s face it, we have two of the worst options running for president this year. Hillary’s been in politics long enough to make a bunch of enemies, and long enough to inspire a bunch of support. Trump’s new to politics, which is terrifying for some and refreshing for others. They’re the two least popular candidates ever to run (but don’t tell Trump–or do, he won’t believe you anyway).

For every left-leaning news article that’s anti-Trump, you can find right-leaning ones to support him. He’s a great businessman. He’s had a lot of failed businesses. He’s well-loved by his workers. He’s been sued over non-payment many times. Back and forth, tit for tat, arguments for both sides fall on deaf ears.

I know I’m not going to convince anyone to switch sides; that’s not what I’m here about. We’re all entitled to our own opinions, and for the most part, we all feel strongly that our opinions are correct. I don’t want to write that someone else’s opinion is wrong, I want to write about why I hold the position I do.

For me, it’s not about Trump vs. Hillary, it’s whose platform is more closely aligned with what’s important to me and my vision of a great America. It’s about which candidate is least offensive for me, personally (okay…it’s a little #NeverTrump, but I did try to give him a chance).

For me, as a woman, I take offense to the degrading things he’s had to say about women, and to the idea that all should be forgiven because of his uncomfortably close relationship with one of his daughters (and it disturbs me he thinks they would be dating if she wasn’t his daughter). As someone close to and very respectful of the Jewish community, I take offense to his assurance to remain neutral on Israel, and to his “America First” mentality reminiscent of the anti-Semitic movement of the ’30s and ’40s which demanded we stay out of WWII and allow Nazism and genocide to sweep across Europe. As someone who believes that love and acceptance should be for all people, I take offense to his proposed wall, to his proposed registry of Muslim Americans, and to his proposal to ban anyone from coming to America (a country founded on principles of religious freedom) because of their religion. As a Christian, I take offense to the hatred, the bigotry, the negativity promoted by his campaign, especially when as a Christian, I am called to dwell on whatever is good, and right, and noble, and love my enemies. As a free American, I take offense to the admiration and respect he has blatantly touted for dictators. As a white person, I take offense to his reluctance to disavow support of the KKK, and to his “accidental” or “unintended” encouragement of white supremacist ideals. As a human being, black lives do matter to me. That doesn’t mean blue lives don’t; they do. It simply means black. lives. matter. They matter, and the black community needs to know that. For me, only one of the candidates can express that message clearly.

I wonder just what time we are hoping to get back to in order to consider America great “again”. Was it back when a woman’s place was in the home? Before we had the right to vote? Was it back when things were segregated? Before African Americans had the right to vote? Or maybe further, when blacks were considered property rather than people? Every decade of our history is rife with examples of triumph and tragedy. For every positive, there is at least one negative. The same is true today. It’s why America is great, and why she is hurting. We don’t need to move backwards. We need to learn from the mistakes of the past and keep charging forward. We need to acknowledge that America is a beautiful melting pot of all cultures, religions, races and ethnicity, and that is what makes her great.

Only one candidate sees the same America I do: one that is already great, but has the potential to be greater.

This is the mantra of my week. Because this weekend, you guessed it, I’m going to the beach.

It’s the annual Wildcards Beach Trip, so the Outer Banks better beware. We’ve spent our time making so many plans that will likely not come to fruition (no matter how awesome “Pickle Back Monday”* sounds) and just repeating “beach” to each other over and over that I am like a child in her last week of school. Who cares about anything at all? THE BEACH IS NEXT WEEK!

Last year, due to so many of us getting hitched and having our own private beach vacations (aka honeymoons), we did not do a beach trip. You can bet this year we will be sure to make up for that fact.

We’ve tried to learn from past “mistakes” (but really, none of our ideas are bad ideas), and attempted to make a grocery list for when we arrive. The normal behavior is a large group of us to rush into the store, grab a cart, panic and just grab everything we see. We all like sandwiches, so we each get a loaf of bread. We all buy our own gallons of milk. We make fun of the one person who always buys donuts, and then we all eat them all week. Inevitably, there are one or two of us who fill their carts with cases of beer, and the ladies in the group insist it’s too much and the men insist it’s not enough and then make it their goal to prove themselves right (we always end up needing more beer. Because we’re garbage). 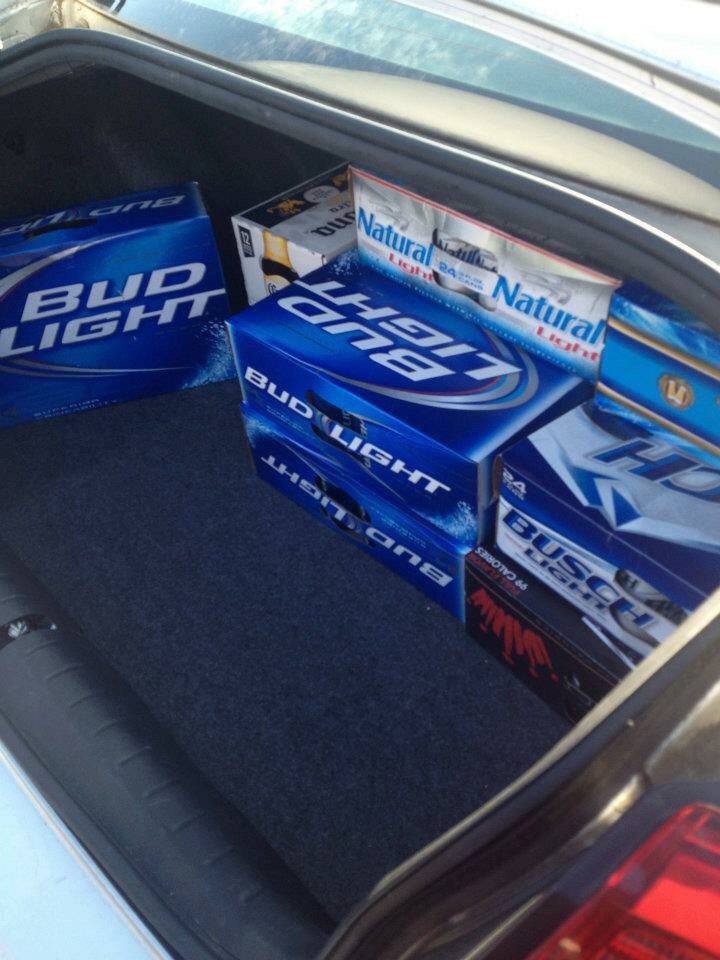 Our first Wildcards beach trip occurred over spring break our senior year of college. It was amazing. The house had an elevator. For that reason alone, it was the best house. Even when the hot tub stopped working, our guys just carried boiling water in pots down from the kitchen on the top floor to dump into it.

There was a room just for video games. There was a nice long table in the dining area for a vicious game of Peanuts (the last time this group ever played due to “cheating” — does it count as cheating if you announce you’re doing so? — and over-competitiveness) and for extensive puzzle-making.

And, I mean, it had a bench by the pool table which was clearly for liquor storage.

Another important factor, our self-designated (and uncontested) group-mother laid out an organized chart of which pairs and trios were in charge of dinner each night. Of course, we made it a competition (how else would we live our lives?), which resulted in pretty amazing food each night (except the night the grill-masters under-cooked some of the burgers, but to be fair, I think we were pretty impatient. Alcohol kills bacteria, anyway, right? WRONG).

Since that trip, others have taken turns being the ringleader of the trip (i.e. facilitating the discussion of dates, choosing the house, determining how to charge everyone for the nights they are staying, etc). These trips have been awesome — because, Wildcards — but also extremely disorganized by comparison. (Group-Mom is so organized there’s no hope of anyone coming close).

Whether this trip will be as organized as spring break or as chaotic as is typical of the Wildcards, it’s going to be fan-freaking-tastic. We’ll eat pounds of mac ‘n’ cheese and shout “VACATION!” to justify it. We’ll make classy cocktails and wash them down with cheap beer and drinking games. We’ll lay in the sun and play bocce ball in the sand and throw a football in the waves.

A few of the guys will likely try to dig a hole to China because that’s apparently still a thing kids do. We’ll talk trash and have life chats, and for one week, nothing else will matter.

END_OF_DOCUMENT_TOKEN_TO_BE_REPLACED

My friends and I are garbage people. We drink cheap beer and play raucous drinking games and create quite the ruckus when we get together. We rarely engage with people outside our group and hardly even socialize within it.

An actual conversation I’ve been a part of:

“I don’t want to hang out with so-and-so’s friends. All they do is sit around and talk.” “I know, who wants to just talk?” “Guys, why don’t we talk to each other?” “I don’t know. Are we bad friends?” *heavy pause as we consider the possibility* “Nah.”

It’s hard to invite new people into our group, even harder for them to be fully accepted. My husband was pleasantly surprised when he was invited into the “wildcards” group photo–at our own wedding.

Here we are, looking hella timeless (even if we’re missing a few wildcards):

To outsiders, we are close-knit and loyal. To each other, it’s rare to hear a kind word said (more often, it’s the meanest words that express the most affection).

This beautiful mess of garbage people came together the way many college friendships do: through that happy coincidence of random roommates. Sophomore year at JMU (yeah, we bleed purple), one group of freshman friends shared a suite with another group of freshman friends, as well as a pair of freshman BFFs (due to more random roommate-ing). The result? Pure garbage. Over the next three years (and beyond), we crushed Natty Light and ate Chanellos Pizza at three in the morning and had to stop playing drinking games like Chandelier because yours truly was (is) too good at it.

We played intramural sports like soccer and floor hockey and dodgeball, and stole our team/friendship name (Wildcards) from an episode of It’s Always Sunny in Philadelphia (the show with the ultimate garbage people) in which (*spoiler alert*) Charlie cuts the brakes of their getaway car. Because wildcard, bitches.

As we’ve entered adulthood, we’ve kept the garbage spirit alive. We’ve celebrated three wildcard weddings in glorious wildcard fashion. At the first, we danced on broken glass and one of us nearly got in a fight for hitting on a bride from another wedding (he’ll swear up and down she wasn’t the bride, but who else wears white to a wedding?). The second, we piled up beer bottles so high on the table, the centerpiece had to be moved and we *almost* felt bad for the guy clearing tables (he brought a giant trash can over just for us). The third, the bride received several “we’re not going to make it” texts with distressing photos of shoes-missing-their-owner and someone wrapped in a blanket hunched over in the bathroom and another sleeping on a hillside (they did end up making it). Also, after at least two of them, we had pizza delivered to the hotel bar rather than buy the bar food (#classy).

But also at these weddings, the brides all received loving (and ridiculous) performances from the wildcards. We form circles and link arms and sway in time to classic love songs. We take off work and drive through the mountains to spend a weekend at Billy’s lake house. We come up with awful hashtags so we can tweet to each other while we’re hanging out, just so the others know what they’ve missed out on (#noLisa). We shell out our hard-earned cash to rent a beach house and spend a week together in the summer.

Because no one loves as hard as us. We just don’t like to talk about it.